Amazon Vs. Walmart - Are Things Changing for Sellers in eCommerce?

We’ve written extensively about Amazon and eCommerce, and Amazon has always been the undisputed champ in terms of market share. However, they’re also famous for mistreating the third-party sellers - like Snap Supply - that account for 60% of their online sales.

But if you’re interested in eCommerce, you’re probably aware that Walmart is Amazon’s closest competitor. Walmart has been making headlines for the meteoric growth it has been experiencing since the pandemic hit. Online sales have increased at least 74% in 2020, a huge increase for Walmart.

You might be aware that Snap Supply, in addition to selling on our site, Amazon, and other eCommerce platforms, sells our parts on Walmart.com. Or, more probably, you are not aware that Amazon sells on Walmart.

Statistically speaking, if you’re using a computer to shop online, you have probably shopped with Amazon before. On the same token, if you have shopped in physical retail stores before, you’ve probably spent some money at Walmart.

There’s a reason for this. 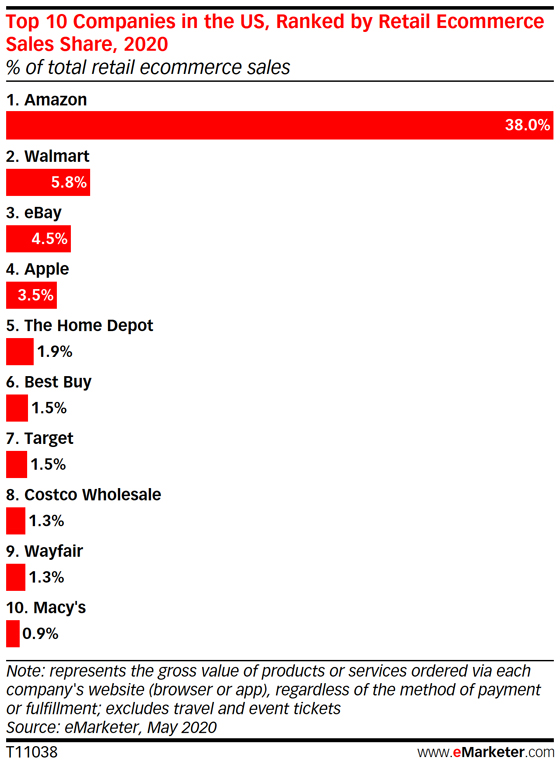 Walmart’s online sales have grown substantially over the course of the pandemic, to the point where they are now #2 in terms of eCommerce market share. But as you can see, they are still barely a sixth of the size of Amazon’s share.

We have established however, that they’re growing. And given Amazon’s toxic and predatory treatment of third-party sellers on their platform, what can’t help but wonder about alternative markets where independent businesses can sell.

So is Walmart worth it?

We’re of the opinion that any alternative to Amazon is beneficial for everyone in eCommerce. Genuine competition might force Amazon’s hand to be more fair to third-party sellers.

However, as it stands, even in the face of Walmart’s own growth and the skyrocketing growth of eCommerce more broadly, there’s no sign that Amazon’s growth might stutter more than just a little bit, allowing little room currently for a real competitor to surface.

But if there is going to be a competitor, at the moment it looks as if it will be Walmart.

From our own experience, Walmart can be a viable platform for third-party sellers. In the way that they generally leave third-party sellers to their own devices, provided they adhere to the platform’s guidelines - as opposed to the Amazon method, which involves a constantly changing landscape of regulations and expectations for third parties - Walmart treats their users well.

There is, however, the issue of how much money there is to be made with Walmart. For what it’s worth, on Walmart, Snap Supply does healthy business. But just going by statistics, Walmart does not offer as robust of a customer base as Amazon - not by a long shot.

A seller looking into having a presence on Walmart should go for it - there is potential for sales and you will be treated better. But it should be only one part of a comprehensive eCommerce push. From our experience, Walmart alone is not a sustainable strategy.